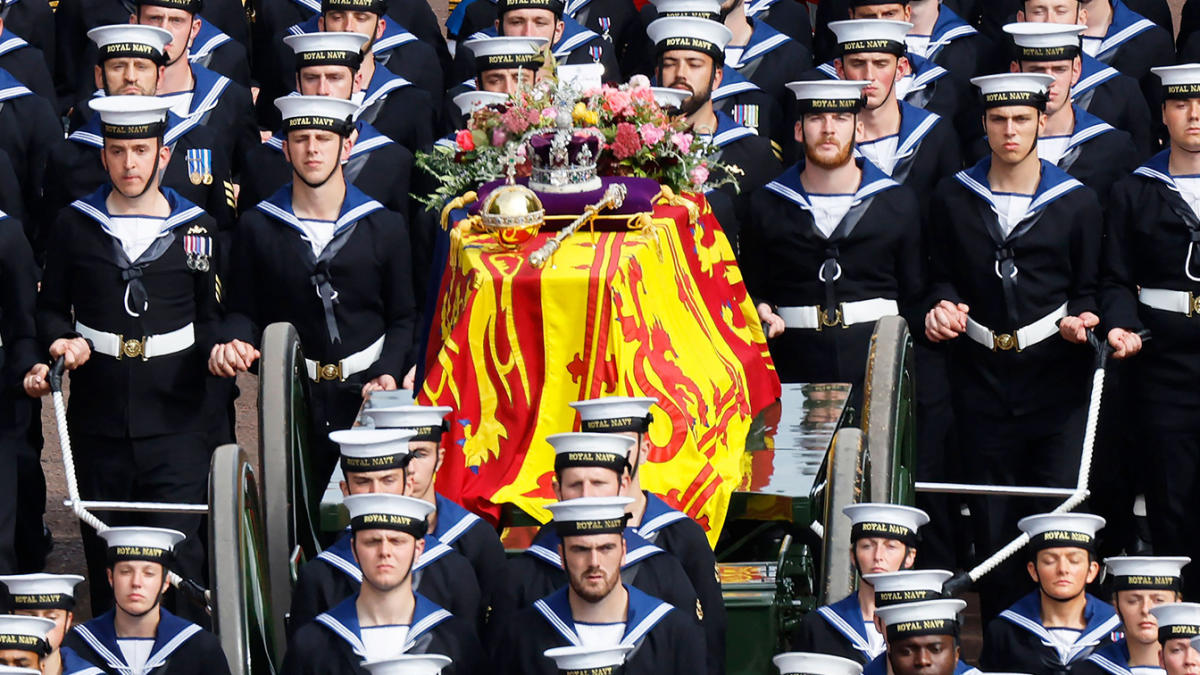 Attending were the late monarch’s closest family members as well as some 500 world leaders and foreign dignitaries. In total, 2,000 guests bid farewell to Britain’s longest-reigning monarch.

Hundreds of thousands of mourners flooded the streets and parks of the capital city while millions tuned in online to watch Queen Elizabeth make her final journey back to Windsor Castle, where she is to be buried alongside her late husband, Prince Philip.

Here are some of the key takeaways from Monday’s events.

President Biden, attending with first lady Jill Biden, was the only world leader allowed to arrive at the queen’s funeral in a private vehicle. After flying to the U.K. on Saturday, the Bidens made their way to the funeral in the presidential limousine, the “Beast,” as part of a motorcade. Other world leaders — including French President Emmanuel Macron, Canadian Prime Minister Justin Trudeau and New Zealand Prime Minister Jacinda Ardern — traveled to the funeral by bus.

According to the Wall Street Journal, Biden was given special permission to travel to the event in his own car. Shortly after the ceremony concluded, he headed back to Washington, D.C.

The queen’s coffin was draped with the royal standard — a flag that represents all nations in the U.K.: England, Northern Ireland, Scotland and Wales. Colorful wreaths were also placed on the coffin along with a goodbye note from the queen’s eldest son and heir, King Charles III.

The card read: “In loving and devoted memory, Charles R.” The “R” in Charles’s signature stands for rex, the Latin word for king.

Prince Harry and his wife, Meghan Markle, the Duchess of Sussex, were seated in the second row of the funeral, while Harry’s father, King Charles III, Queen Consort Camilla, Prince William and Kate Middleton were seated in the front row alongside their children. Also in the first row was the queen’s son Prince Andrew, who was stripped of his royal titles earlier this year due to his friendship with convicted sex offender Jeffrey Epstein.

The Duke and Duchess of Sussex — who stepped back from their royal duties in 2020 and moved to California — sat next to Harry’s cousins, Princesses Beatrice and Eugenie.

Harry was barred from wearing his military uniform at the funeral despite having served the greatest amount of time in the army, rising to the rank of captain and serving two tours in Afghanistan.

There was significant meaning behind the jewelry that Kate Middleton, the Princess of Wales, and Meghan wore to the queen’s funeral. Kate wore a four-string pearl and diamond choker necklace that was owned by the queen. The necklace had previously been worn by her late mother-in-law, Princess Diana. The piece dates back to the 1970s, when it was presented to the queen as a gift from Japan. Kate previously wore the choker for the queen and Prince Philip’s 70th wedding anniversary in 2017, and again for the prince’s funeral last year. Paired with the choker, Kate wore pearl drop earrings that were a gift to the queen from the ruler of Bahrain for her wedding in 1947.

Meghan also wore a pair of meaningful earrings that featured diamonds and pearls. A gift from the queen, Meghan wore them on her first solo outing with her grandmother-in-law in 2018.

Two-minute silence across the U.K.

A two-minute silence was observed across the U.K. to mark the end of the queen’s funeral. Crowds watching the funeral on screens in Hyde Park and other royal parks stood in silence to honor the queen. Inside Westminster Abbey, the end of the silence was followed by the singing of “God Save the King.”