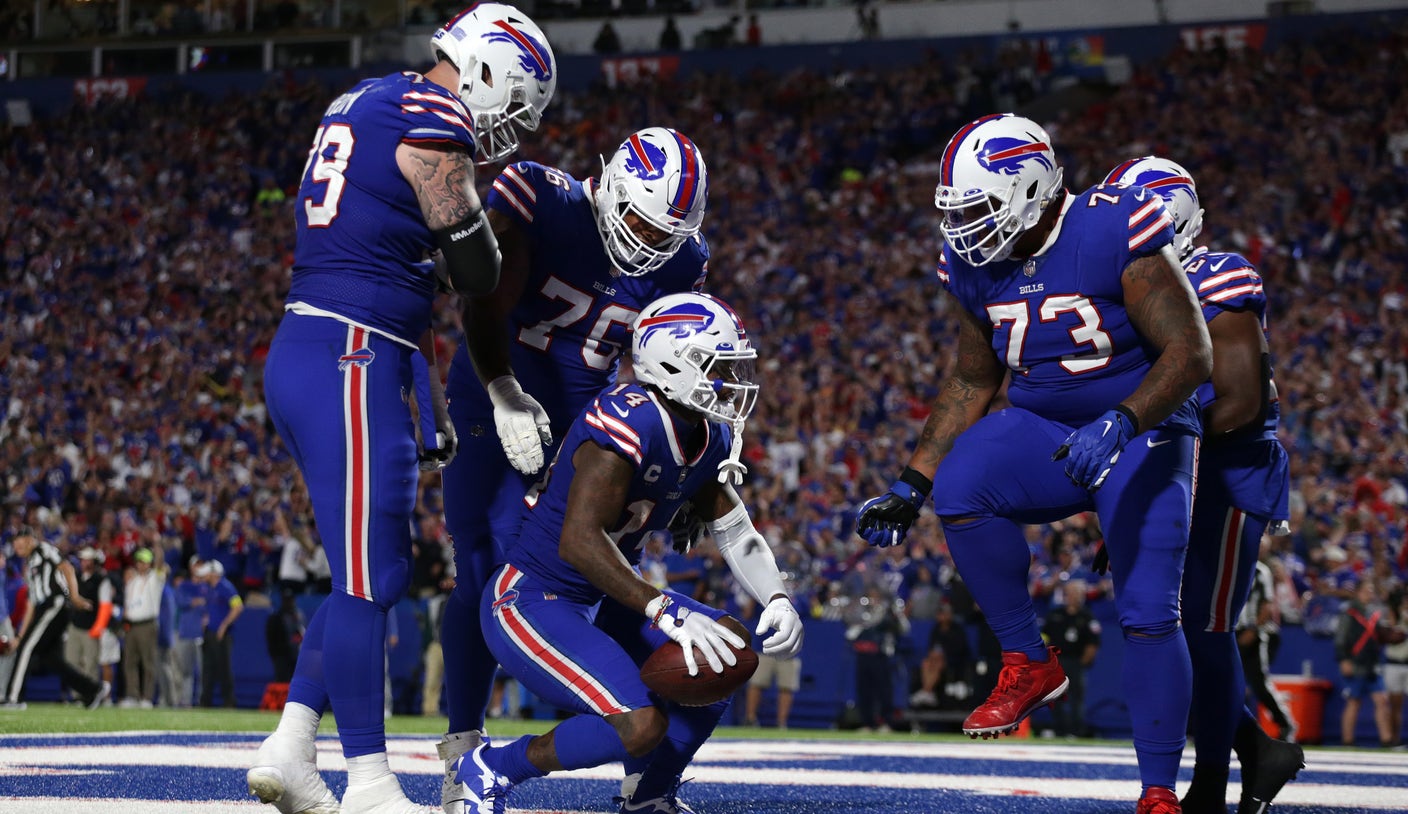 Even when the Buffalo Bills had to send their punter onto the field for his first attempt of the season in Week 2, they managed to come away with a positive outcome.

Tennessee Titans receiver and punt returner Kyle Phillips misread the punt and took it to the facemask. The Bills recovered. And Buffalo’s first and only punt of the season somehow ended up being a 30-yard gain.

That’s the kind of night the Bills enjoyed, particularly in the second half of their 41-7 win over the Titans. Part of it was a product of sheer brilliance from Josh Allen and Buffalo’s defensive line. And part of it was due to self-inflicted wounds from the Titans. But mostly, they won because of a transcendent performance from Allen, who was 26 of 38 for 317 yards and four touchdowns in just three quarters of play in his team’s blowout. Buffalo sat Allen for the entire fourth quarter.

The Bills’ drubbing of the Titans secondary was so bad that Janoris “Jackrabbit” Jenkins offered to help out Tennessee — for the right price.

It wasn’t a perfect night. The Bills dealt with a handful of injuries, none as significant as cornerback Dane Jackson’s neck injury. Thankfully, he had motion in his extremities after a terrifying injury that sent him to the hospital in an ambulance.

But aside from those scary minutes, the night was bright for Buffalo — and bleak for the Titans, who simply had no answer for Allen and Stefon Diggs. Diggs made 12 catches for 148 yards and three touchdowns. Their offense had a casual way of dominating — a smooth way of pillaging the Titans defense for points. The third touchdown to Diggs was a natural example.

That said, there was one touchdown that they made look difficult — and that’s because it highlighted their one-of-a-kind connection, with Diggs streaking downfield after burning his defender. Allen hit Diggs in stride, putting the ball in a practically perfect spot. I’d like to say it’s reminiscent of Brady and Moss or Manning and Harrison. But it wasn’t. The closest comparison is Patrick Mahomes and Tyreek Hill. But even that feels faulty.

It was unique. It was Allen and Diggs.

Even journeyman receiver Jake Kumerow and fullback Reggie Gilliam looked like studs. Gilliam had a touchdown and Kumerow finished with two catches for 50 yards. Allen and offensive coordinator Ken Dorsey spent the night playing with their food for three quarters. In the first three quarters, they put up all 41 of their points — with help from a pick-six by linebacker Matt Milano that ended Ryan Tannehill’s night. Quarterback Case Keenum entered the game at the start of the fourth quarter.

What should scare every NFL team is that the Bills aren’t just built around their dominant offense. Their defense is a force. They put up two sacks after compiling seven in Week 1. Those nine rank second in the NFL after two weeks. The Bills defense generated four takeaways (two fumbles, two interceptions), and simply overwhelmed the Titans.

Credit to Von Miller for being a monster and pulling off the Ghost Rush for a second consecutive week (where he inexplicably and simultaneously sprinted and bent underneath an offensive lineman’s armpit). Miller’s unstoppable spree has helped spring Jordan Phillips and Gregory Rousseau. But Miller hasn’t just solidified the pass rush. He also logged an outstanding tackle for loss, with a solo tackle of Derrick Henry in the backfield. Those don’t come along often.

Buffalo’s injuries piled up by the end of the game. Jackson went to the hospital. Linebacker Matt Milano (stinger), safety Micah Hyde (neck) and defensive tackle Jordan Phillips (hamstring) left the blowout and didn’t return. Center Mitch Morse left the game and returned. They join the ranks of defensive tackle Ed Oliver and receiver Gabe Davis. Those injuries will be worth monitoring, largely because injuries are seemingly the only thing that can stop this Bills team.

Where else could you find a weakness?

Maybe they have a lack of experience at cornerback with Kaiir Elam and Chrsitian Benford. But Tre’Davious White, one of the best corners in the NFL, will return from his ACL injury over the next few weeks.

Maybe they can work on their ability to run the football. But we won’t really know if that’s a weakness until someone tests their passing attack.

This Bills team doesn’t feel like the type of squad that gets off to a strong start before losing momentum late in the season. Buffalo looks like it has the potential to be a historically great team. The Bills are built better than any team in the NFL on offense, defense and special teams. And they have Allen, who is playing like the league’s best quarterback.