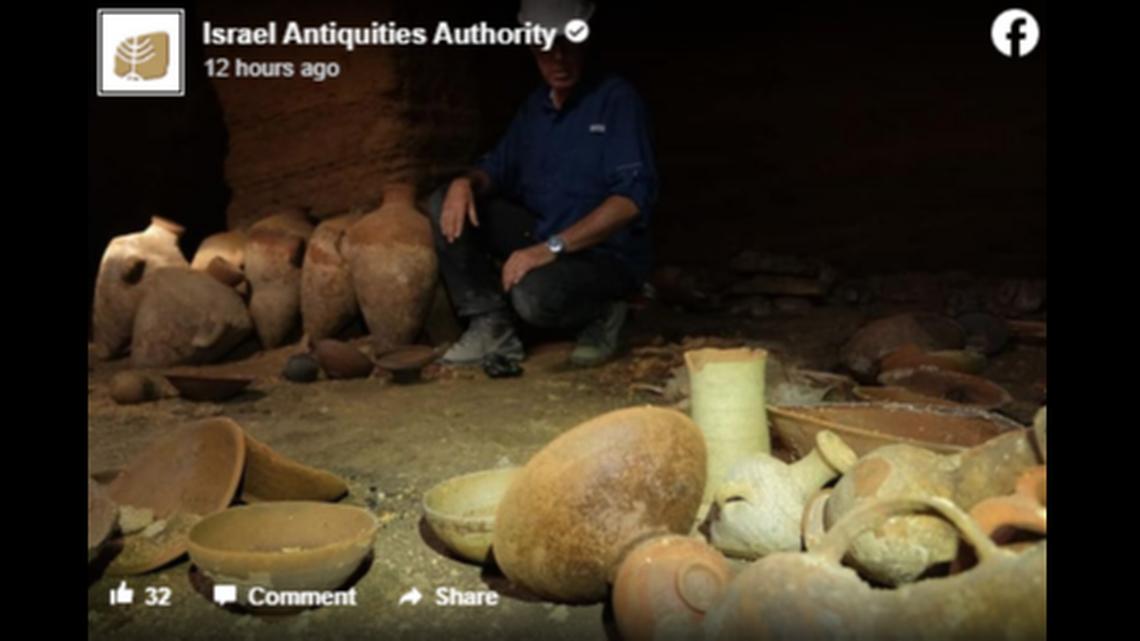 Construction crews working at Israel’s Palmachim Beach National Park found a cave from the time of King Rameses II, revealing “what looks like an ‘Indiana Jones’ film set,” according to the Israel Antiquities Authority.

The discovery was made Sept. 14, when digging equipment created a hole that offered a view inside a mysterious room, officials said. Palmachim Beach National Park is south of Tel Aviv, on the Mediterranean coast.

“Archaeologists … descended a ladder into the astonishing space that appeared to have frozen in time,” the authority reported in a Facebook post.

“The hewn cave was square in form with a central supporting pillar. Several dozens of intact pottery and bronze artifacts were lain out in the cave, exactly as they were arranged in the burial ceremony, about 3,300 years ago. These vessels were burial offerings that accompanied the deceased in the belief that they would serve the dead in the afterlife.”

Officials did not report if any bones or other human remains were among the artifacts, which included pottery and bronze items.

The cave has been dated to the era of King Rameses II, “the Pharaoh associated with the Biblical Exodus from Egypt,” officials said.

“The fact that the cave was sealed … will allow us the employ the modern scientific methods available today, to retrieve much information from the artifacts … not visible to the naked eye,” according to Eli Yannai, a Bronze Age expert with the Israel Antiquities Authority.

“The cave may furnish a complete picture of the Late Bronze Age funerary customs.”

Much of the pottery found was intact, including storage jars and footed chalices, officials said. Some of the containers had been brought from as far as Lebanon and Cyprus and may have held “expensive commodities,” officials said.

Guards were posted at the site immediately after the discovery, but “a few items were looted from the cave before it was sealed up,” officials said. An investigation of the theft is underway.

“Within a few days, we will formulate a plan to carry out the research and the protection of this unique site, which is a feast for the archaeological world and for the ancient history of the land of Israel,” the authority reports.

Palmahim National Park includes “the remains of the ancient port city of Yavne-Yam from the Middle Canaanite period,” according to the park’s web site. Past excavations in the park have uncovered “ancient waterworks and agricultural apparatus,” officials said.