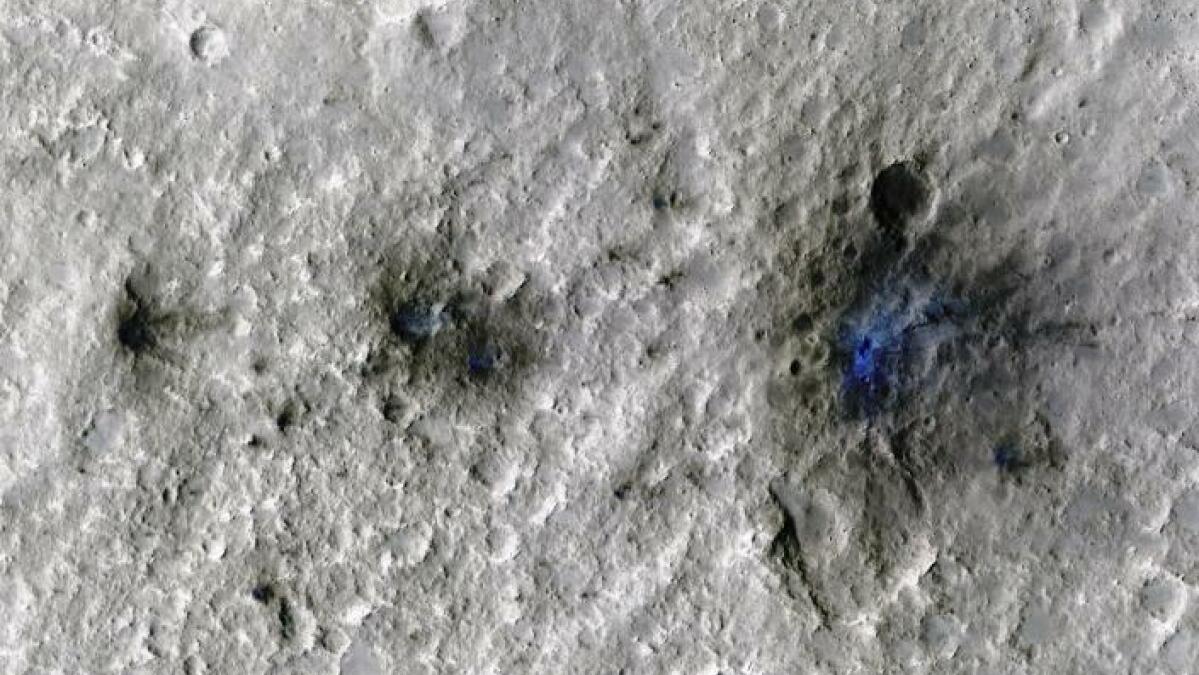 Just over a year ago, a space rock hurtled through the Martian atmosphere, broke apart, and slammed into the red desert.

NASA just revealed footage of the new impact craters on Sept. 19, as well as three other earlier impacts. The collisions were significant enough for the space agency’s geologic probe, InSight, to detect “marsquakes” from up to 180 miles away.

“After three years of InSight waiting to detect an impact, those craters looked beautiful,” Ingrid Daubar, a planetary scientist at Brown University, said in a NASA statement.

The image atop this story shows the result of a meteoroid — a space rock that has yet to impact the surface — that exploded in the Martian atmosphere into at least three “shards,” ultimately leaving three fresh craters in the ground, NASA explained. The InSight lander, equipped with a sensitive seismometer, detected the explosion and impacts. Although InSight is running out of power, it certainly continues to make meaningful extraterrestrial observations.

After InSight detected the booms, NASA sent its Martian satellite, the Mars Reconnaissance Orbiter, to scour the region for darkened patches on the desert floor. Dark areas are telltale evidence of newly disturbed soil and dust. (The unnatural blue hues are added to make impact details more apparent.)

A few other impact craters detected by InSight and imaged by the Mars Reconnaissance Orbiter in 2020 and 2021 are shown below:

Space is a story of collisions. They happen regularly in our solar system. Often wayward asteroids make chance impacts with other objects orbiting the sun.

Our solar system isn’t nearly as chaotic as it was billion of years ago, so impacts are relatively fewer. But the heavily-cratered moon, whose surface isn’t recycled like Earth’s, leaves poignant evidence of cosmic impacts in our solar system neighborhood.

NASA and its astronomical partners are vigilantly watching skies for any potential impacts with Earth in the coming years. But there’s nothing threatening, that we know about, on the horizon. As Mashable previously reported:

“Fortunately, no known asteroid over 460 feet across will threaten Earth in the next century or so. The chances of a major impact in our lifetimes is, as far as we know, extremely small, astronomers say. To illustrate, impacts by objects around 460 feet in diameter occur every 10,000 to 20,000 years, and a “dinosaur-killing” impact from a rock perhaps a half-mile across or larger happens on 100-million-year timescales.”

Yet astronomers hope to know if a sizable space rock is headed our way, years in advance.

“You need to know what’s coming, when it’s coming, and how hard it’s going to hit,” Eric Christensen, director of the asteroid-seeking Catalina Sky Survey in Arizona, told Mashable.